“When I was leaving Europe I swore to myself I would never in my life write any applications, requests, and ask favours, etc; I would not stay in a queue, and I would not muscle in, and if I die, I will not die in a crowd (…)”

I am trying to find myself in the institutionalized and   bureaucratized world.

The starting point of “process” is based on the absurd assumption of scholarship project applied to the Ministry of Culture. It grew out of helplessness in the face of mechanisms which control today’s world of art in our fatherland.

This project, which is a kind of intellectual game, is always a winner, regardless of the Scholarship Commission’s verdict and its author has a fleeting impression of overcoming a system.

And the exhibition itself?

It is a continuation of the project. All these papers, applications, requests, questionnaires, refusals, etc. I recycle and change them into a construction element to create my own space.

The project assumption is to receive a refusal concerning six-month scholarship. The refusal of financial means will cause the situation in which the project idea will not be accomplished. Referring to F. Kafka’s The Trial this absurd project in assumption is to show the fate of an artist who is dependent on the net of office workers. This bureaucratic artistic world puts an artist in the role of a mere supplicant, silent performer of the limitations concerning the project realization, which is to be granted with financial means. The whole process is guarded by demands stated by the curators and critics. Like in Kafka’s novel, the artist has no right to appeal to decision makers. Following his/her artistic vocation goes under dependence which preoccupies his/her artistic freedom. So the artist is in an absurd situation and any move reveals this absurd aspect even more.

means and methods of project realization

The applications, which have been collected for many years, such as refusal papers, artistic projects of mine and other artists, will become the basic matter of artistic realization. These papers will be multiplied in a huge number and gathered in the space of a gallery for the time of exhibition.

the expected result of the project realization

The application refusals, undone projects and exhibitions would make peculiar waste paper consisting of creative hopes, which were buried in the place where art should be presented and in this way the place will be changed into a storage room for the once examined and now forgotten redundant ideas. The transformed art gallery is to represent the position of an artist. The artist whose freedom is no longer essential to anybody turns into a well-working little machine and her/his activity is merely the unwanted manifestation of insubordination in the world of institutionalized and organized art.

short justification for the rightness of granting this scholarship

Since in my project I assume I will not be awarded a scholarship so, if the grant was given to support my project the situation would reach an impasse in which an artist is present nowadays. It will be the best commentary to the assumptions of the project. Being given a grant, the artist would go under power of the good will of an office worker and so his/her artistic ”be or not to be”. The artist will surrend and his/her creative existence will be limited by the demands and rules contained in the administrative tables.

In such an institutionalized world the free artist is doomed to a failure from the start.

According to the scholarship schedule the realization of exhibition is planned in the final stage of the project.

The items to be presented will be all applications submitted in the institutions such as refusals, undone artistic projects of mine and other artists. In addition they will be made in thousands of copies and also the empty sheet of paper and files will be used in a massive number to represent absence and undone projects.

High long shelves, made for that purpose and filled with the unimportant waste paper are supposed to create a ‘little’ impossible architecture. The piles of paper put in the dim interior, lighted by UV lamp only, which is normally used for documents identification or disinfection, now multiplied by the reflection in the mirror will become for the time of exhibition a real construction of our delusions and afterimages.

The main material and the substance of the exhibition – a huge number of bureaucratic papers collected by me during a year of receiving my scholarship fee and earlier, was transformed and put into a big piles 2,40m high. In the small room of the gallery they made a 5,40m long wall. At its both ends I put at right angles two mirrors which multiplied the piles of papers ad infinitum.

In the big exhibition Room of the Open Workshop gallery I placed a blinding lamp (as at the questioning) and eight speakers, from which the following question was flowing:

Complete the form. State what you have done throughout your lifetime.

I used here a piece of Krzysztof Kieslowski’s film study entitled “Office”; it was filmed with hidden camera in the Insurance Company in 1966.

The endless hall of papers was photographed by fragments since even the wide-angle lens couldn’t take it all.

The entrance from the big Room to the dim Room with papers.

I made the sound installation with 8 speakers hung in the empty big Room.

The viewers coming in were blinded by the lamp placed straight ahead the entrance.

The sound out of speakers: Complete the form …

Process #2 is a second part of the Process project. While at Open Workshop the main emphasis was on the illusion made of piles of papers and mirrors, in Przemysl the process realization was a bit different.

I highlighted there the transition to the other dimension of illusion. I achieved that by the sterile space of the gallery and its architecture. The viewer who watched the installation walked through a small, lighted audio room directing to a black hall. Next, the viewer disappeared in there going into other dimension of the black matter in order to reach the wall of the UV lighted piles of papers. 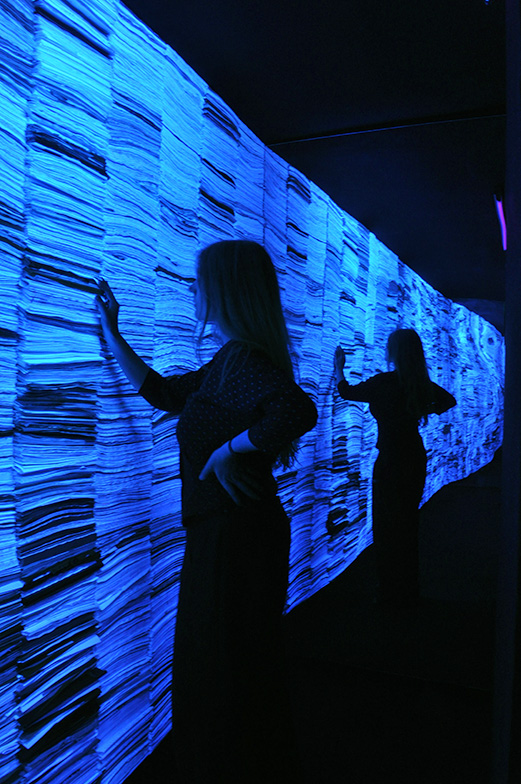 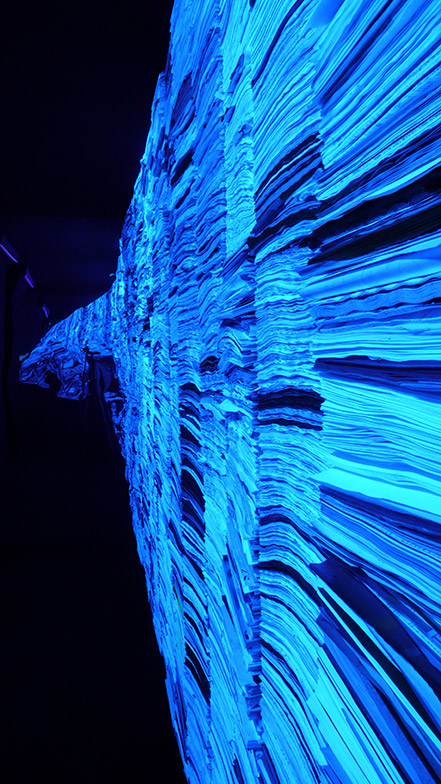 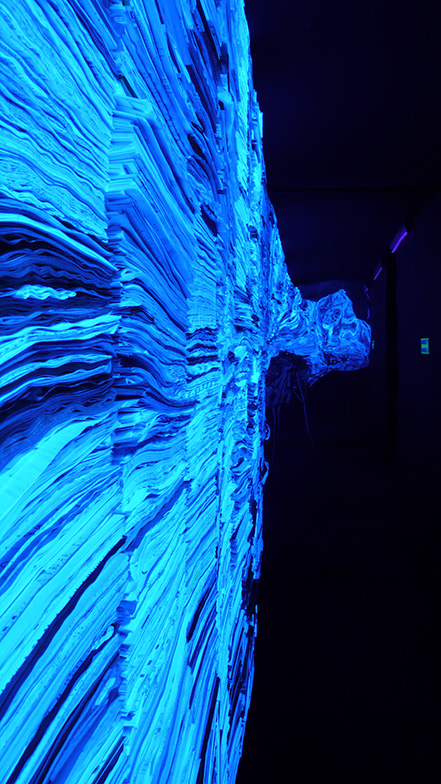 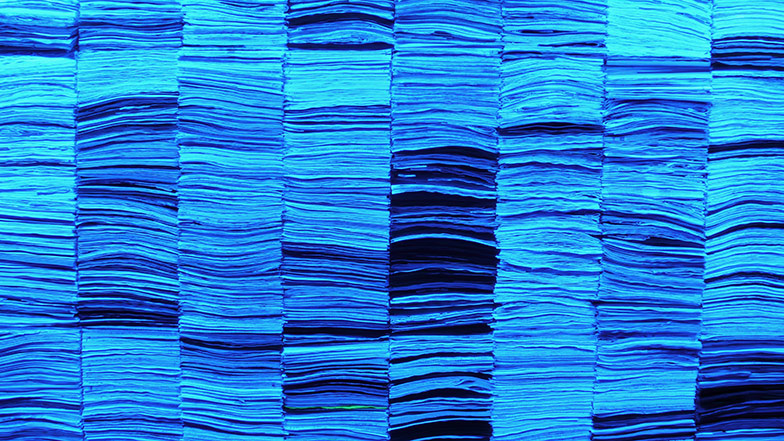 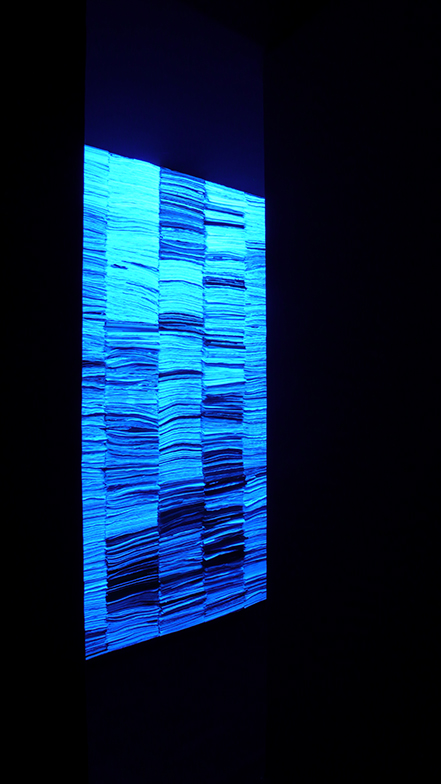 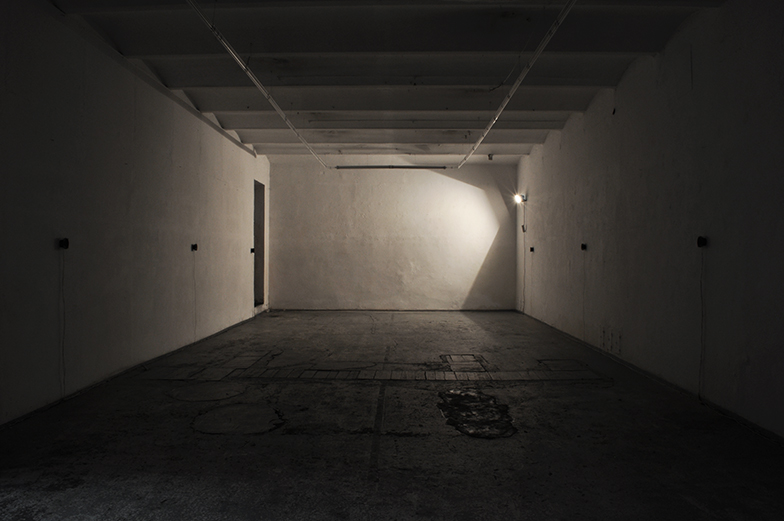 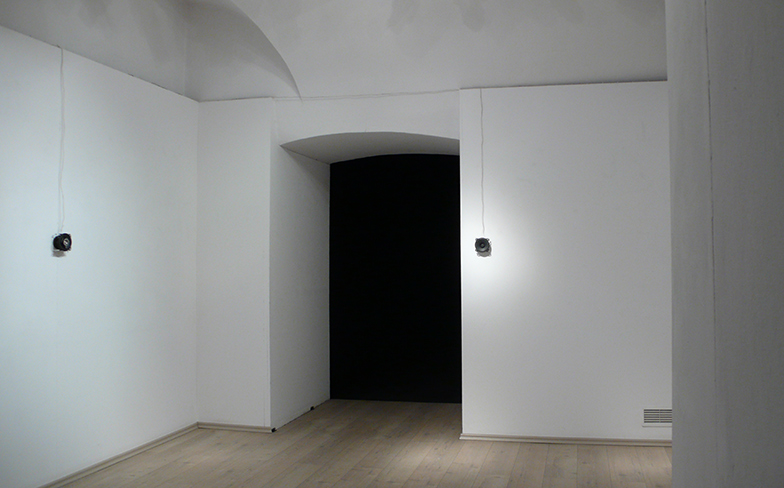 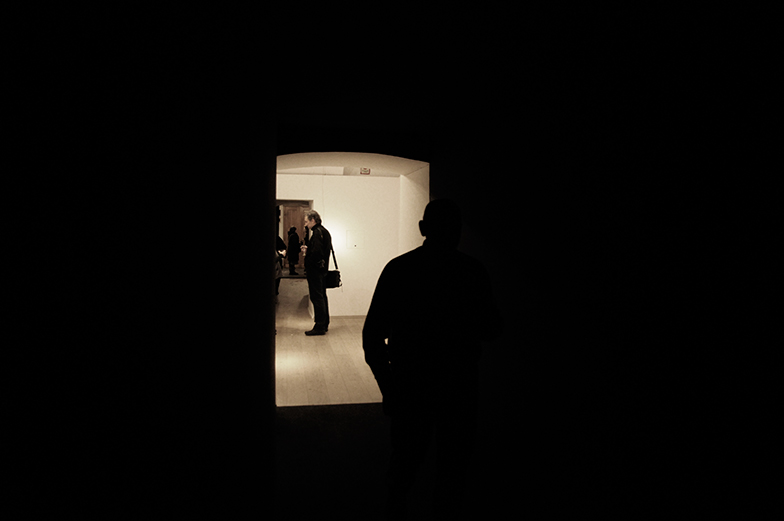 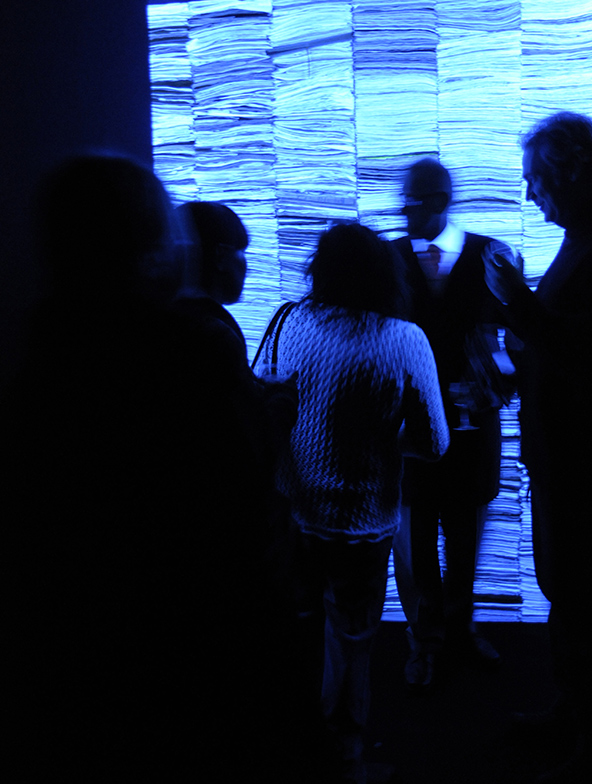