A toy – kaleidoscope as a model of a structure (kaleidoscope makes complicated symmetrical ornaments by the use of mirrors and coloured glass).

In my project realization the optical tool is a part of device that turns round on its axis in the right direction. The micro – pictures that are produced inside are filmed by the industrial camcorder and next transmitted to the outside. The film on the gallery’s floor goes under transformation by the subsequent kaleidoscopic mirrors, which are places in the room. The pictures created by the movement to the right and left direction, form loops as a result of the iterations. Having being posed in such an ornament “self-production” the viewer becomes redundant. She or he can turn into an intruder who disturbs the efficient working of devices and clarity joined with the “performaces” with occur beyound and without him or her.

However, the viewer who suddenly goes under parallel to emitted sequences transforamtions and co-creates subsequent loops of structure. Even though the structures remain the same at the persistent changes. The less and less amount of reflected light causes them to loose their sharpness and then deforms them, and finally they disappear totaly.

Is the viewer able to leave the structure consciously? Her or his hestitation can be stopped only by a break in energy flow or damage of deviced producing the images…

The minimalizm leading to the use of the necessary means, asceticism and the lack of all the decorative elements ennoble this art and its assumptions. Someone, knowing only some of her works, could protest at this point since her project “ITERATIONS” is the most decorative world which can be followed by none of our imaginations. But, here, I find the proof for the once taken way of thought. The kaleidoscope is a simple children toy and at the same time the cosmos of unrepeatable sight sensations in uncountable number of events. The world of fairy tales and dreams, and the complete projection of the interior are all to discover, as the artist points out herself, the “overproduction”. Her presentation is the self-made surrealistic machine, a kaleidoscope (a massive metal tube) which is turned around automatically producing these “wonders” or rather it “generates” (trying to use a modern language) them. In  the final effect we see the huge kaleidoscope pictures transmitted by the video camera and a projector everywhere.
Is this a rattling toy or rather a philosophical entrance into the “cosmos”? As far as I am concerned, the second solution is an answer especially when I am surrounded by these pictures over my head and under my feet in the darkness.

In the dark room I constructed the interior on a triangle plan of caleidoscope’s structure. The white triangular screen of its floor reflects pictures that are generated by other kaleidoscope which is turn around mechanically. Next, the pictures go under subsequent iterations in mirror. 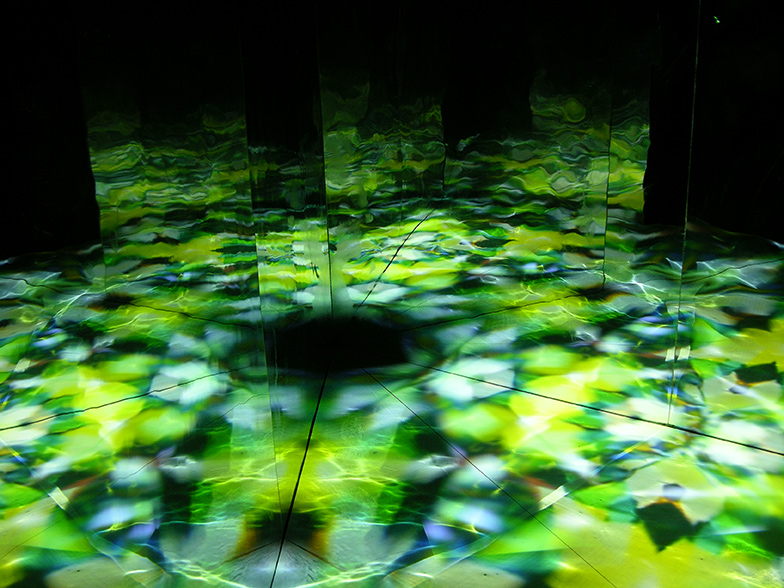 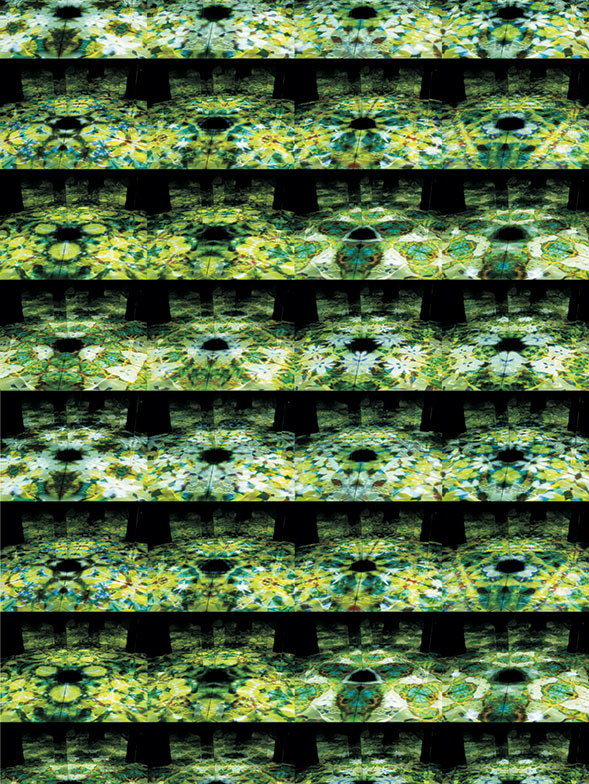 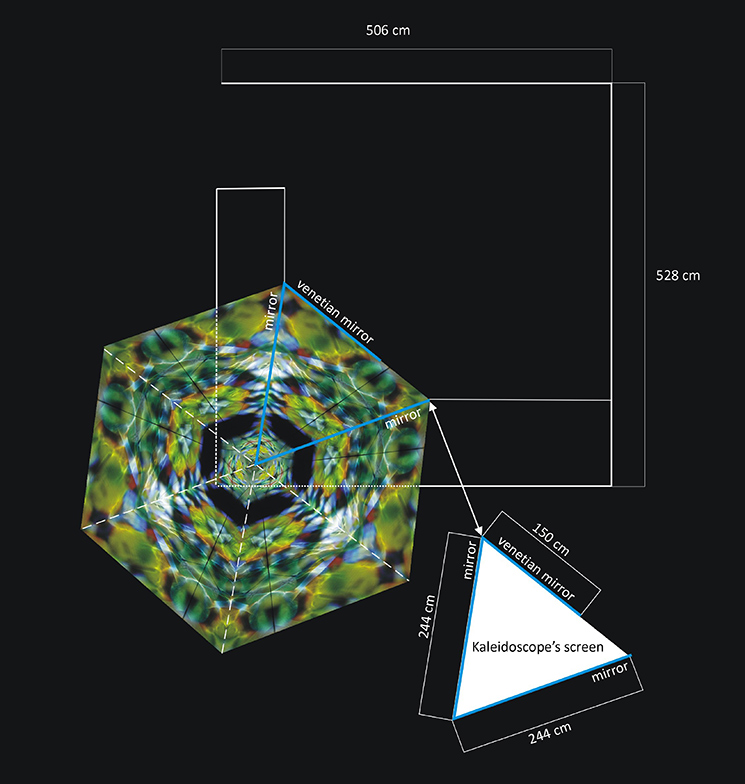 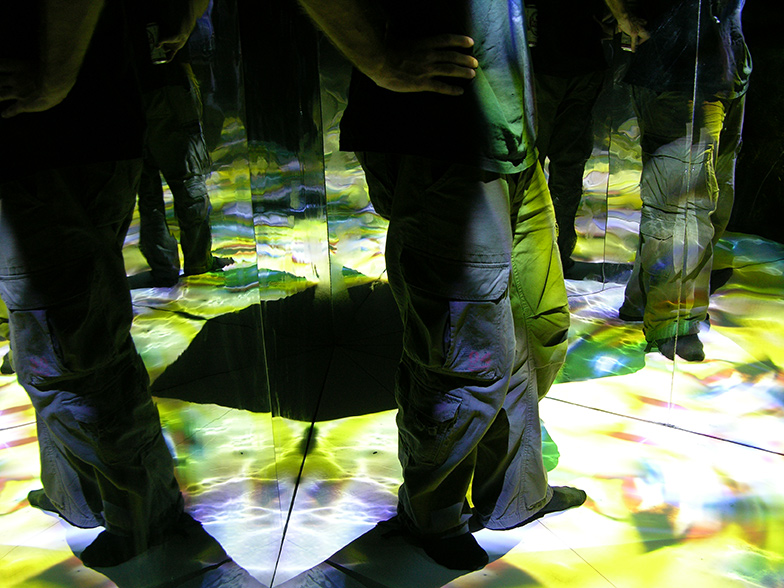 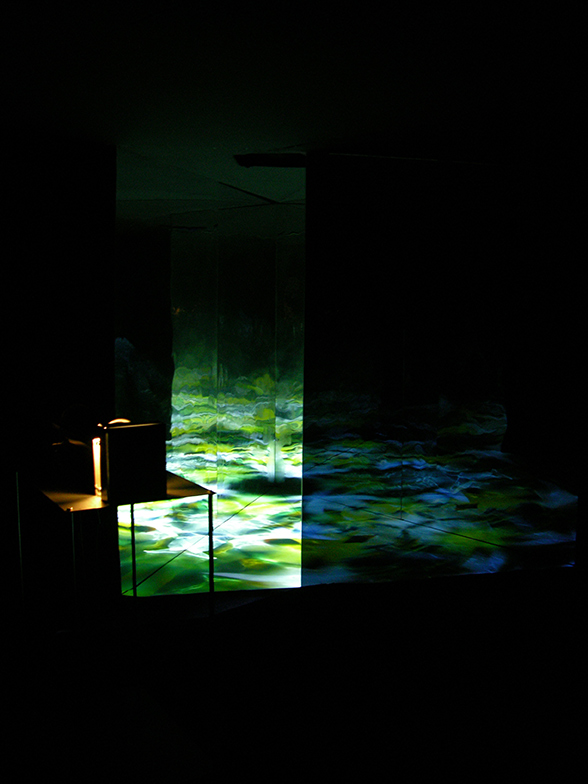 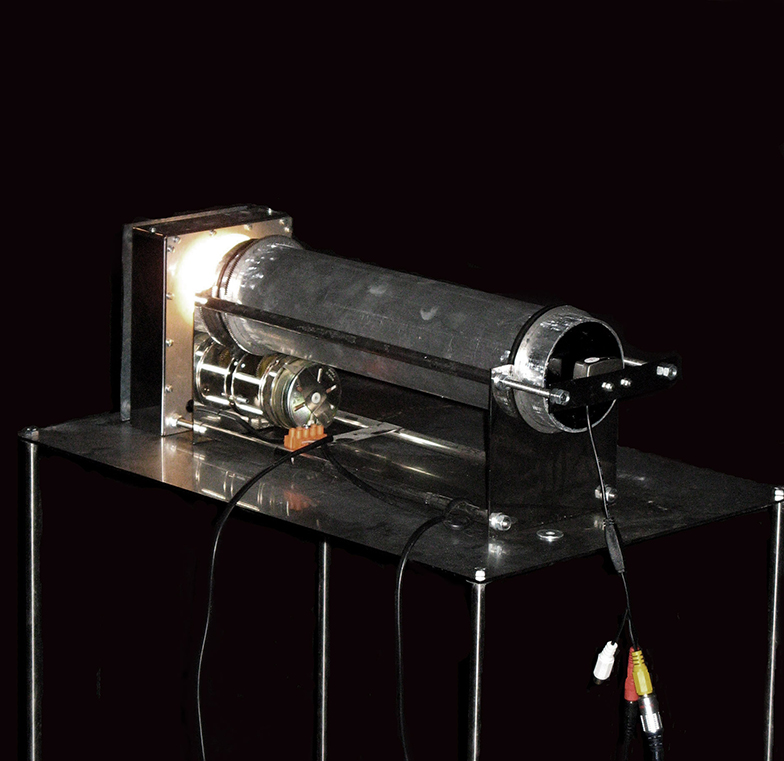